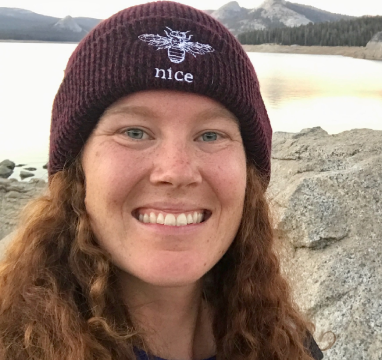 Michelle grew up in Sanger, California, where the Sierra foothills were her backyard. While attending Reedley College for an A.S. degree in Biological Science, she worked as a docent and zookeeper for the nonprofit Project Survival’s Cat Haven. Michelle then transferred to Humboldt State University to complete a B.S. degree in Wildlife: Conservation Biology/Applied Vertebrate Ecology. During her time as an undergraduate student, she volunteered at the Humboldt Wildlife Care Center, for the Forest Service’s Hoary Bat Crew, and in a research lab studying giant kangaroo rats. Since then, Michelle has worked as a seasonal field biologist on projects studying southwestern willow flycatchers, yellow-billed cuckoos, Santa Cruz Island scrub-jays, painted buntings, and several species of New Mexico’s pinyon-juniper birds. She has also been employed as an environmental educator for the Fresno Chaffee Zoo and for science centers in California and Alaska. Most of Michelle’s free time is spent hiking, rock climbing, open water swimming, pet sitting, and painting landscapes and wildlife.